The International Fund for Agriculture Development (IFAD) on Tuesday announced that Uganda had been allocated $168 million (about Shs651.6 billion) for rural transformation through agriculture. The allocation is aimed at enabling rural farmers to access long term loans for agricultural practice.

The fund, which has a duration of seven years, is being administered under the IFAD arrangement called the Project for Financial Inclusion in Rural Areas. In Uganda the project is being implemented by the ministry of Finance and it entered into force in November 2014.

In an interview with Daily Monitor at Speke Resort Munyonyo on Tuesday at the official opening the fourth Regional Conference on Implementation of Rural Agriculture Transformation, with the theme financial inclusion, IFAD regional director of Eastern and Southern Africa Division, Mr Sana F.K. Jatta, said IFAD has 45 ongoing projects in 22 countries in the region with the total portfolio of $1.7 billion.

“Out this amount Uganda has been allocated $168 million, in the category of a medium size country programme,” he said.
Ugandan farmers and other business communities are always faced with the problem of limited access to long term finance.
Mr Jatta said Uganda’s project is competitive and very innovative which is encouraging because the projects in Uganda have provided productive and beneficial support for the farmers involved in it.

The IFAD project encompasses funds from IFAD itself, government contribution, beneficiaries’ contribution, development partners such as the World Bank, among others.

Mr Jatta added if all the funds from the IFAD are added together they total to $3.5 billion, being administered in a cost effective way to spur development.
Uganda’s projects include palm oil in Kalangala and the surrounding areas; while in other areas it includes sunflower, simsim and beans.

Mr Jatta said the way the IFAD project is designed based on Public, Private Producers Partnership.

“We started this programme in Uganda in 1995 in Kalangala and it aims at increased productivity of the farmers as well promoting financial inclusion through the government. We do this by reaching the poor with the financial services, train them on how to engage in linkages of markets, train them on business development plans,” he spelt out.

IFAD is an international financial institution and specialised agency of the United Nations dedicated to eradicating poverty and hunger in rural areas of developing countries.
Uganda’s minister of Agriculture, Mr Vincent Bamulangaki Ssempijja, who opened the conference said: “Increasing household agriculture is one of government strategy of rural transformation.” 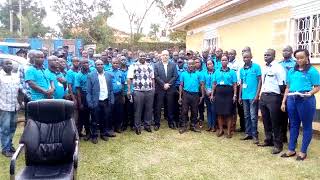